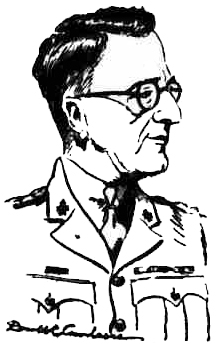 Nottingham’s Lidice Week was opened on the 30th of September 1945. It reflected a festival originally planned in 1943 and followed a format proved successful by other cities. Many Czech dignitaries, members of the Lidice Shall Live committee and local elected representatives attended the launch. Interestingly, with the threat of Nazi tyranny extinguished, there were no international dignitaries acting on behalf of the British Government or the Soviet Union present; nor were there any delegates from the miners’ union in attendance. According to the Nottingham press, the guests included:

The day’s proceedings opened with a luncheon at the Council House, given by the Lord Mayor to meet Dr Cisar. This was followed by a military parade, at which the Lord Mayor took the salute outside the Council House, a service at St Mary’s Church and a public meeting in the Shire Hall. The Lord Mayor, proposing the toast of “The Lidice Shall Live movement,” expressed the hope that not only Lidice but also the whole of Czechoslovakia would be restored to its old prosperity. In and around Nottingham was a mining population whose hearts and affections flowed out to the people of Lidice, whose town was razed by flame and its homes, reduced to ashes; he prayed to God that in the days to come, Lidice would rise again in greater glory.

Dr Cisar explained that if Lidice had been destroyed by a tornado, or an earthquake, or some such cataclysm of nature he would have had some hesitation in accepting Nottingham’s help, for it was not good to one’s pride to feel that one’s country or one’s hometown had become an object of charity. But Lidice was one of many dozens, if not many hundreds, of villages in occupied Europe violated,

“… according to plan by deliberate acts of cruelty, its men executed on the spot, its women dragged away to Germany, the elderly to serve in labour camps and the younger to serve the lust of Nazi sub-humans, and children dragged away to German institutions to be made typical Führer-adoring sub-humans. Lidice had become not only the memorial of the great sacrifice of peace-loving and a freedom-loving people in the struggles of freedom against darkness and slavery, but it had become the one great symbol of the universal solidarity of all men of goodwill without which, and without the ultimate victory of which, this war would have been fought in vain.”

The subsequent church parade service at St. Mary’s was conducted by a Free Church minister, the Rev. R. K Ross, with Dr Cisar reading the lesson and Mr Julius Guttman singing two anthems by Czech composers. The Rev. Canon R. H. Hawkins, Vicar of St. Mary’s, in his sermon described the visit to St. Mary’s of the Plenipotentiary of Czechoslovakia as being a unique occasion in the history of St. Mary’s Church. On behalf of the church wardens and people of St. Mary’s, Canon Hawkins offered a hearty welcome to Dr Cisar and his companions.

After expressing his pleasure at the fact that in Britain the Government of Czechoslovakia had found a home and the nationals of his country a haven, while the Czechoslovak and British troops served together, side by side, he dealt in detail with the fate of the inhabitants of Lidice on the 10th of June 1942 and observed:

“It was difficult to find words to express the horror we felt in the presence of such a foul act. On that very day when the exponents of the Nazi creed appeared to be and felt themselves to be so completely triumphant, they actually brought about their own defeat through the death, sufferings, and tears of the gallant people of Lidice. If this was so, those gallant men had not died in vain, or their womenfolk suffered in vain.”

The service concluded with the singing of the Czechoslovak and the British national anthems, and a collection was taken for the building of a village church at Lidice. Later, at a meeting at the Shire Hall, the Lord Mayor read letters from Mr Will Lawther, President of the National Union of Mineworkers, and Mr F. G. James, on behalf of the Nottingham Trades Council, together with communications from Mr G. deFreitas, MP for Central Nottingham, and Mr James Harrison, MP for East Nottingham; all parties urged support for the rebuilding of Lidice. In response, Dr Cisar said that:

“Lidice, by its destruction, became a symbol: it belonged not only to Czechoslovakia but to all nations. It should become for us a memento and a pledge never to allow the conditions to arise that would make an occurrence of this type possible again.”

The closing week of Nottingham’s Lidice appeal saw several other fairs, events and activities take place including: a lunch hour concert at Boots Factory, Beeston on the 3rd of October, a cinema show at the Futurist Cinema, Basford, on Sunday the 7th of October, and a dance at the Victoria Ballroom in aid of the fund on Friday the 12th.

On Saturday, the 7th of December 1946, in a final report, the Nottingham Lidice Shall Live board wrote that:

“This country has raised £100,000 especially for the Miners’ Welfare Institute, wherein research will be carried on in miners’ diseases and today the Lord Mayor handed over a cheque for £1,542 13s 9d to Dr Barnett Stross, MP for Hanley and Chairman of the “Lidice Shall Live” committee. The Chairman of the Nottingham committee was Col. D. Bourner, and Treasurer, Mr E. W. Smith.”

For more information about Colonel Bourner and the Nottingham Lidice Shall Live committee between 1943 and 1946, read The Path to Lidice – the definitive account of the Lidice Shall Live campaign, and its legacy.
Available now, online from Amazon in hardcover, paperback and in ebook formats – free with Amazon Unlimited.