The Inauguration of Stern Park, Illinois – 12th of July 1942

“They came in the night, men in boots and brown shirts, and they took from their homes the bewildered miners and farmers, the tailor and the priest, the boy of 17 and the old man of 70, more than 200 in all, and they shot them, because they could think of no other way to avenge the death of Heydrich. Fifty-six women they took also and killed, and proudly listed their names. The rest of the women they drove into what they called concentration camps; and these women the world will never see again.

They herded the pale, terror-stricken children into trucks and carried them off to correction schools where they would be taught that they must honor the murderers of their fathers and the brutalizers of their mothers, The ninety homes they burned to the ground, the church of St. Margaret (SIC) they stamped into the earth. And the name of the little town of Lidice, through which ran the street called after a President of the United States, they rubbed out, they thought, from history. Why did they do this deed, more terrible than anything that has happened since the Dark Ages, a deed not of passion, but of cold, premeditated, systematic murder and rapine? Why? They did it because they are afraid. They are afraid because the free spirit in men has refused to be conquered. Theirs is a system of force and terror and Lidice is the terrible symbol of that system.

But it is not the only one. Of the 500,000 men, women and children who have been shot in Europe by the Nazis, at least 25,000 have perished in mass massacres. Poland, Norway, Belgium, Yugoslavia, all have their Lidices. But this one-a symbol of all-we have sworn to remember, if only because the Nazis themselves demand that we forget it. Once more they have misjudged the human spirit. Because a hangman was killed, Lidice lives. Because a hangman was killed, Wilson Street must once again be part of a little Bohemian town. Because the lanterns of Lidice have been blacked out, a flame has been lit which can never be extinguished. Each of the wounds of those two hundred men and fifty-six women is a mouth that cries out that other free men and free women must not suffer a like fate.” 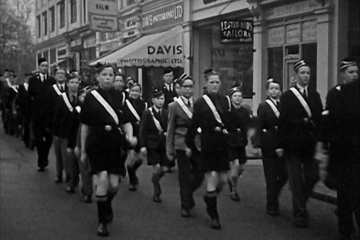